Rocket 88 Doughnuts also takes pride in adding the extra “ough” in their store name. By spelling donuts with the added letters, Rocket 88 Doughnuts reaches back to a sweeter, simpler time: a time when everything was handcrafted and you couldn’t spell the term that describes this tasty treat without the word “dough.” It’s a fun play on words, but in reality, it gets to the heart of the Rocket 88 Doughnuts mission of creating homemade donuts with natural ingredients. 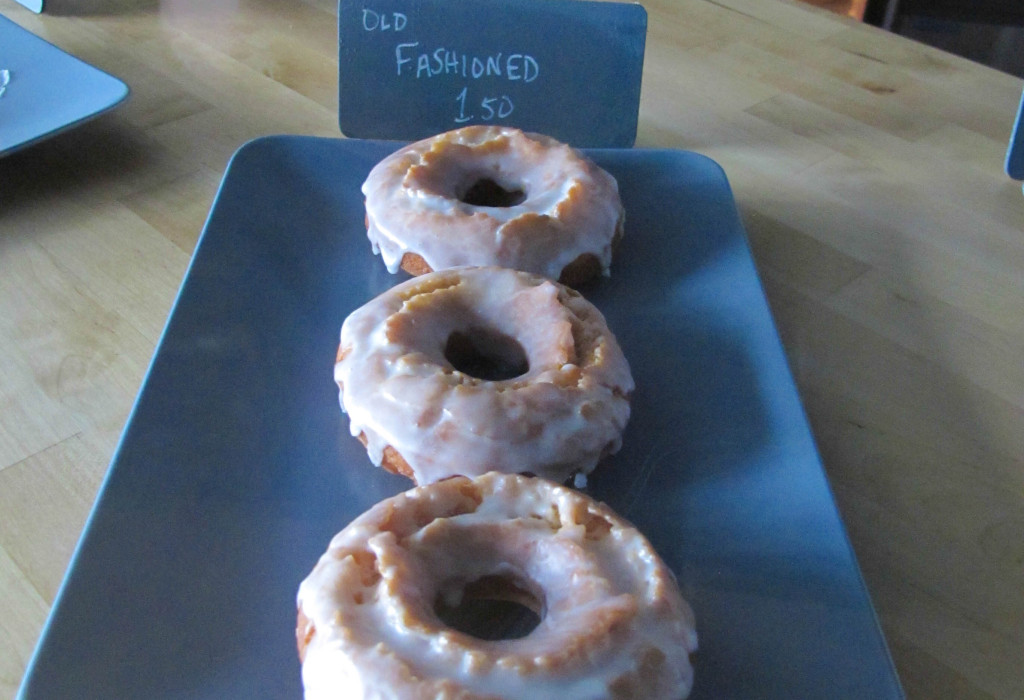 Located in the burgeoning Fountain Square Cultural District, Rocket 88 Doughnuts joined the donut game in December of 2014 just a mile away from their friendly competitors, General American Donut Company. While Rocket 88 Doughnuts shares its affinity for craft donuts with General American Donut Company, the bakers here pride themselves on using almost entirely organic ingredients (about 90 percent). Most days, this means plenty of interesting and inventive flavor combinations – including special Waffle doughnuts on Wednesdays and Sundays – and plenty options for vegans to choose from. Rocket 88 Doughnuts are also working hard on a new and improved Gluten Free recipe to be added to the menu very soon. 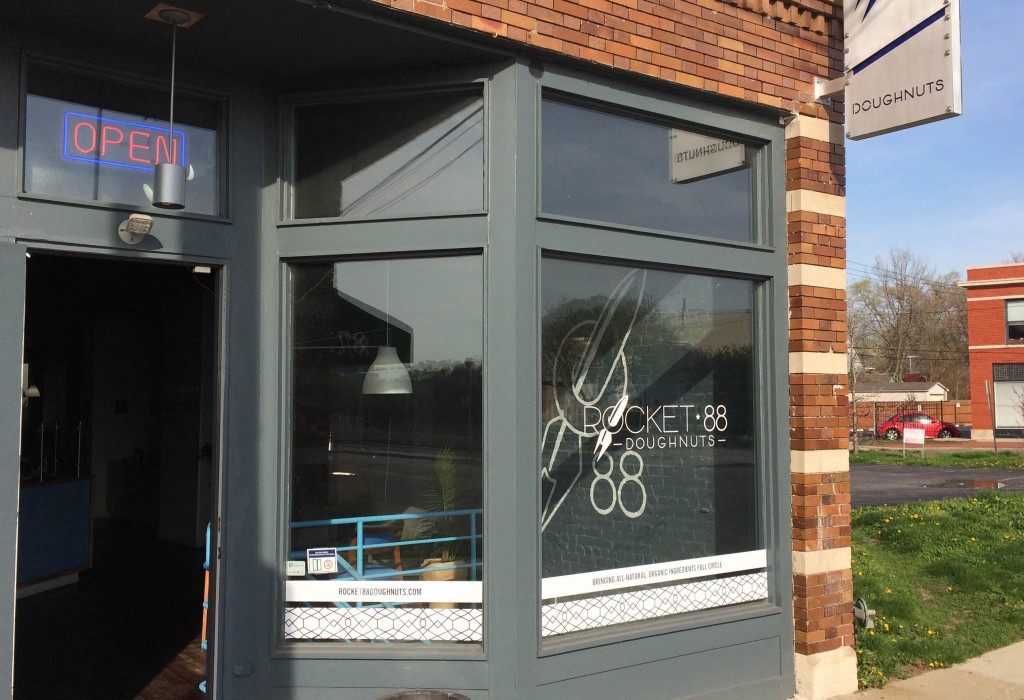 The interior of Rocket 88 Doughnuts is long and welcoming, with high ceilings and rustic hardwood floors. Since the menu of doughnuts here is always changing, the wall next to the counter is one giant chalkboard full of doughnuts, coffee, and other tasty beverages. Rocket 88 Doughnuts lists of all the ingredient suppliers for the day, creating a sense of transparency and local business promotion – regulars include Sage’s Simple Syrups, Wildflower Ridge Honey, Smoking Goose, and they’re always looking to expand upon this list. Though the suppliers vary, the coffee here is always sourced locally from Mile Square Coffee, a specialty coffee roastery in downtown Indianapolis. 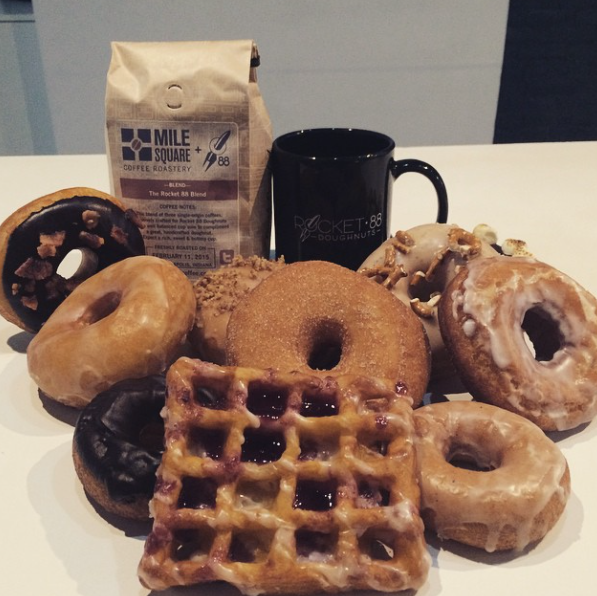 There is a great assortment of organic teas, espresso based drinks, or standard cups of coffee to go along with their carefully made doughnut. Better yet, many of Rocket 88 Doughnuts’ doughnuts already incorporate beverages into their flavors, with options such as Green Tea Vanilla, Hazelnut Espresso Cream and Mexican Hot Chocolate.

Despite serving breakfast-type food, the best time to be at Rocket 88 Doughnuts is in the evenings. On Fridays and Saturdays, they reopen from 6 to 10 p.m. after a short afternoon break. During the hiatus, the crew adds even more flavors to their line of doughnuts by experimenting with creations such as a pulled pork donut, cookies with a brown butter bourbon sauce, and waffle BLT sandwiches (all vary in availability). 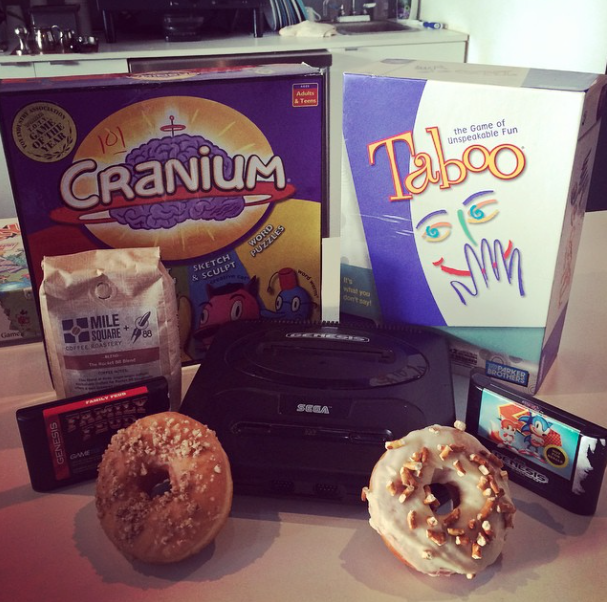 Depending on the night, Rocket 88 Doughnuts hosts live music, retro video game competitions, and board game nights for all who wish to join. If you’re not into the games, it’s still nice to know that you can get a doughnut past 6 p.m. when the craving strikes. For a look at what’s next when it comes to events and donut flavors, check out their Instagram feed (and prepare for a good amount of mouth watering).

In partnership with Mile Square Coffee, Rocket 88 Doughnuts has created it’s own custom blend of beans, “The Rocket 88 Blend.” When in Rome, right? But seriously, if you’re looking for a well-balanced brew with a smooth and sweet finish, this will do the trick.

With a constantly rotating menu, it really depends on the day here. That being said, the Dark Chocolate Bacon is a consistent crowd favorite, proving that bacon can, in fact, make most foods taste better. Those looking for something lighter should try the Maple Pecan doughnut, which is often made vegan as well. Coffee-lovers should try the Hazelnut Espresso Cream, a deliciously rich doughnut with hazelnut glaze and a fluffy, espresso flavored cream inside. If you happen to stop by on a Wednesday or a Sunday, order at least one Leslie Knope. And yes, it’s exactly what you think it is: a fried, waffle doughnut. 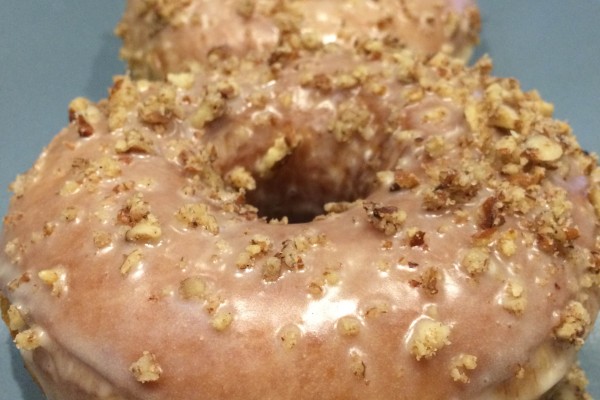