Ace of The Spade

Ace of The Spade

If you’ve ever seen The Godfather, you’ll remember the scene where Peter Clemenza knowingly says “leave the gun, take the cannoli.” And if you’ve ever been to Mike’s Pastry, you’ll understand that sometimes a cannoli is more important than anything else.

I didn’t fully understand this until I had my first real cannoli experience at Mike’s Pastry in the North End of Boston. I had been told by numerous people before I’d even left that I “haaaad” to go to Mike’s Pastry for the cannoli. Now I don’t know what your previous cannoli experiences have been, but mine had been lackluster at best. I was used to soggy, wet pastry (basically a glorified taco shell) with a “cool whip”  filling,  topped with a maraschino cherry. I was uninspired and unimpressed by the whole cannoli “thing”. 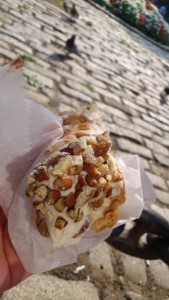 This all changed the minute I stepped in the door at Mike’s Pastry. First, these guys have figured out how to sell a bazillion cannoli per minute. They can stack, pack and wrap your cannoli as fast as you can order them. So although there was a line, it was moving so fast it didn’t make much of a difference. Second, it smells like your Grandmother’s kitchen in there – that is,  if your Grandmother was Italian, and you called her Nonna and she made incredible cannoli. Seriously the smell was intoxicating. I became giddy just standing in front of the pastry case trying to make a decision on which one(s) to try.

Third and most importantly, the cannoli themselves. There were dozens of different varieties; chocolate, pistachio, hazelnut, espresso – you name it, they have it!  I went with the candied pecan cannoli. It was perfect. The pastry shell was strong enough to hold the filling, but soft enough that it didn’t crumble into pieces after the first bite. The ricotta filling was rich, creamy and on the savoury side of sweet. Both ends had been dipped candied pecans – adding a crunchy balance of texture to the whole experience. The creaminess of the filling, the crunch of the pastry and the sweetness of the pecans – it was just pure, unadulterated cannoli bliss.

Now if you can’t wait (I couldn’t) to get your hands on your cannoli, there is a little park right down the street at St.Leonard’s Peace Garden, where you can settle in. Take a seat, crack open your pastry box and enjoy. If you have to lay down in the grass to regroup afterwards, that’s ok too.

If you are lucky enough to live in the United States, you’ll be glad to know Mike’s Pastry has just started shipping their cannoli (and other Italian pastries) across the country. If you don’t live in the States, you’ll just have to book a flight to Boston. Trust me, it’s worth the trip. 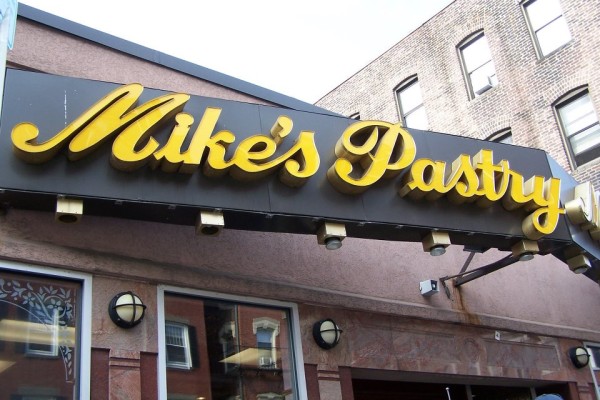