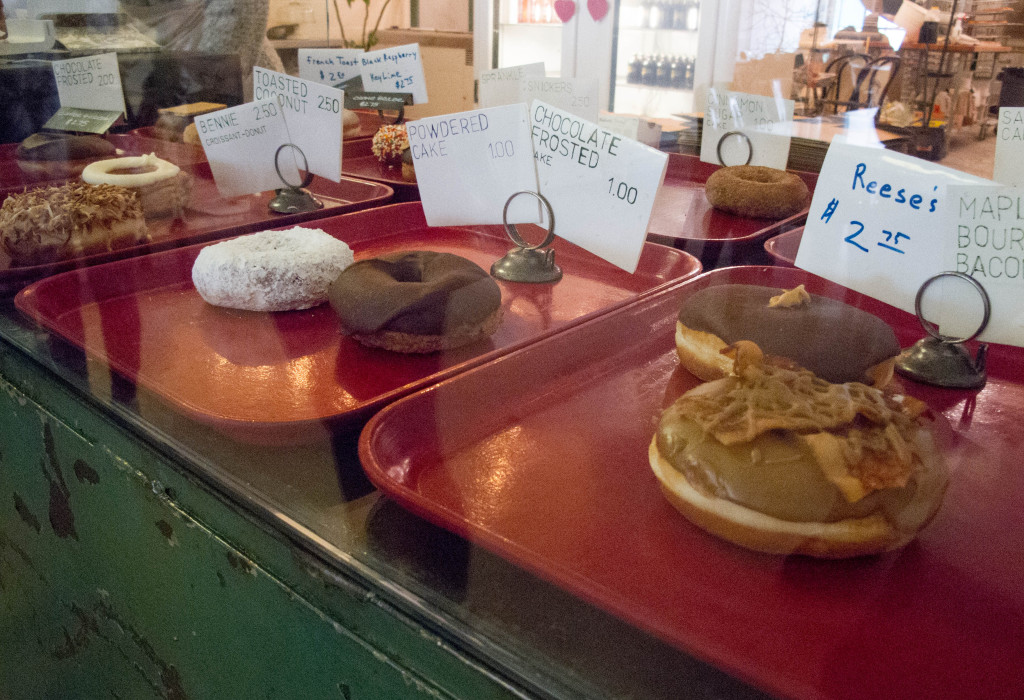 These aren’t your average donuts: these are craft donuts. Owner Adam Perry is proud to say, “All of our donuts are made from scratch, fresh every morning – no mixes or premade anything. Our donuts are bigger, better, and they have interesting flavor combinations.”

Since General American Donut Company opened its doors in June of 2014, Perry and his wife, Kari Nickander, have been reinventing the Indianapolis donut scene with their range of cake, yeast and vegan donuts. They continue to create innovative flavors such as PB&J, French Toast, S’mores, Crème Brulee, and Maple Bourbon Bacon to name only a few, and the list keeps growing. 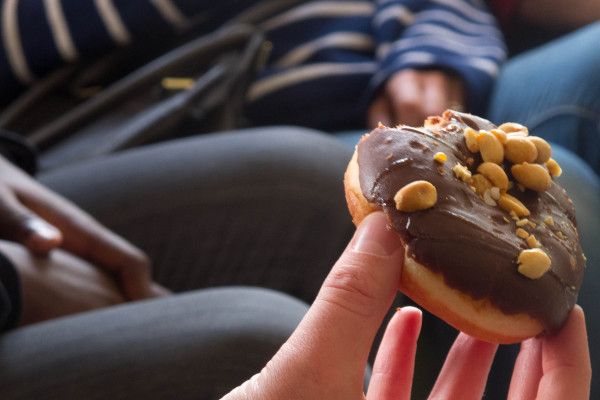 If that wasn’t enough to stand out, General American Donut Company also incorporates many of their ingredients from local vendors; chicken is sourced from Fischer Farms in Jasper, IN, and locally based Sun King Brewery is used for special beer-infused donuts.

While the donut flavors at General American Donut Company may seem curious at first, one bite into these sugary flavor-bombs and you’ll be hooked. The flavor profiles create an experience: the Maple Bourbon Bacon, for instance, tastes less like a doughnut and more like a homestyle breakfast of pancakes and bacon, all jammed into one pastry, while the S’mores donut recreates that favorite campfire experience. 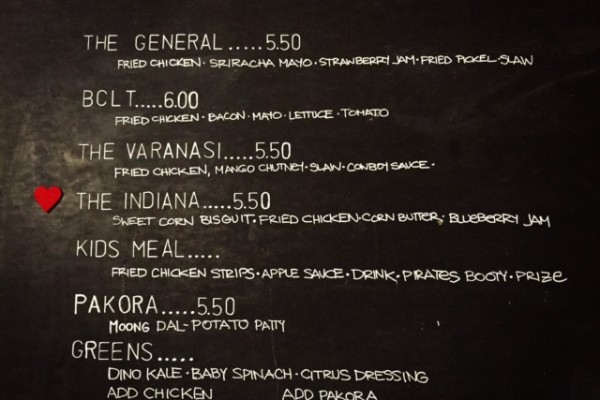 Many times, the bakers here like to play on this same savory/sweet combination. This is never more evident than in General American Donut Company’s signature line of donut sandwiches, offered for lunch. All sandwiches are made on unglazed brioche donuts, so they resemble more of a sweetbread than a traditional yeast donut.

Along with their donuts, General American Donut Company takes their coffee seriously as well. They’ve brought in a special roast from Stumptown Coffee Roaster from Portland, OR, to balance out their delightfully sweet, fried pastries. And as if donuts and coffee wasn’t enough to make you salivate, General American Donut Company will soon add a range of homemade Pop Tarts and Ice Cream Sandwiches to their stable. 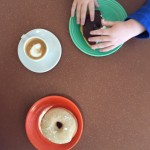 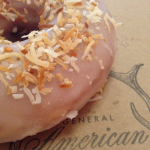 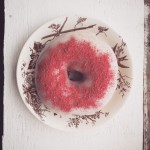 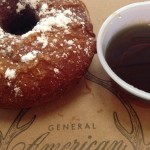 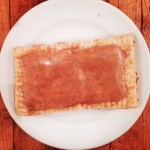 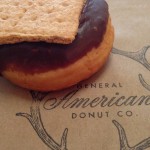 Housed in an old manufacturing building, General American Donut Company is taking part in the revitalization of the Fletcher Place area of Indianapolis. The interior lends itself nicely to friends looking to hang around for a while. High ceilings with exposed beams, concrete floors, large windows flooding the space with light, and a welcoming staff encourage a come-as-you-are type of ambience. The seating is a mix of tables with mismatched chairs and a few couches for lounging around. The atmosphere is overall one of casual conversations and laid-back Sundays. Movies are projected on to the concrete cinder block walls, a clever use of the space and a savvy design decision. It’s a place to meet up and hangout, not so much a place to hammer out work.

Bring a few friends and order a few flavors to split for the most diverse, donut experience. A word of caution though: you might end up ordering a second round! 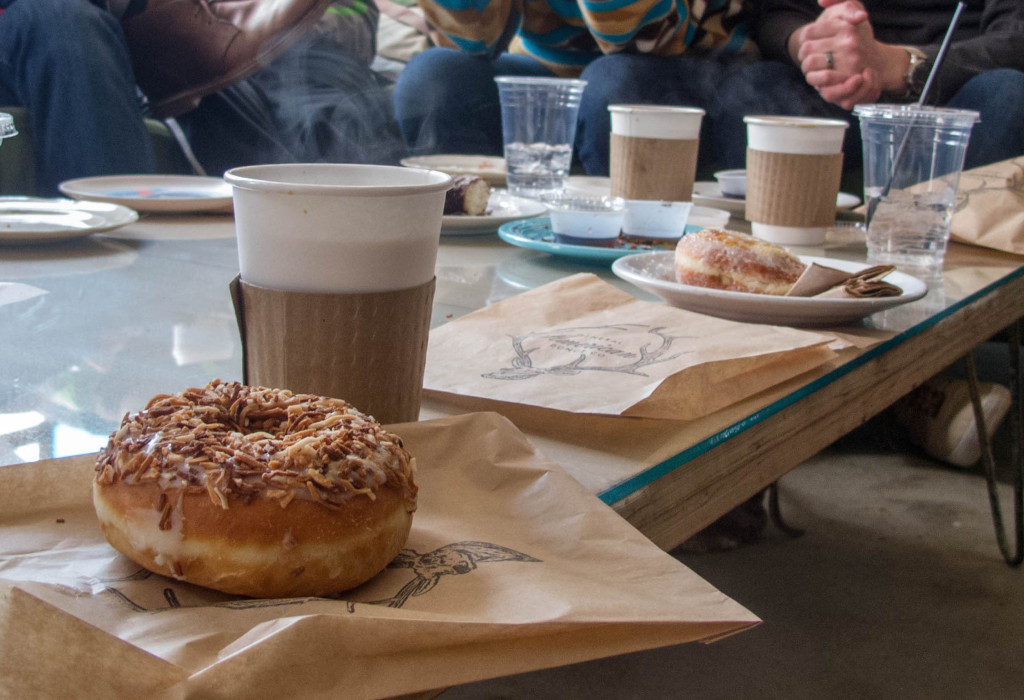 All coffee is made with beans from Stumptown Coffee Roasters, so you can’t really go wrong – choose either an espresso based drink or a cup of brewed coffee.

The flavors here are always changing, but there are few staple donuts you can depend on. Those with a massive sweet tooth will love the French Toast donut (comes with maple syrup for dipping), while the Toasted Coconut is great for those who like a little crunch in their pastries.

As for the cake donuts, the Raspberry Orange Habanero is a must; Habanero Orange in the dough, with a freeze-dried raspberry dusting on top.

There is also at least one Vegan flavor offered everyday, the Lime Glazed is the perfect combination of tart and sweet.

If you’re around for lunch, order the donut sandwich that started it all: The General. This sandwich features fried chicken, sriracha mayonnaise, fried pickles, and a topping of cabbage slaw, all smashed between two sweet buns lined with strawberry jam. And it’s all made from scratch! It may sound like an odd combination, but it is a must-try.

Or, for a vegetarian option try the Grilled Granny with Fontina cheese, Granny Smith apples, blue cheese and fig jam grilled on a brioche donut. 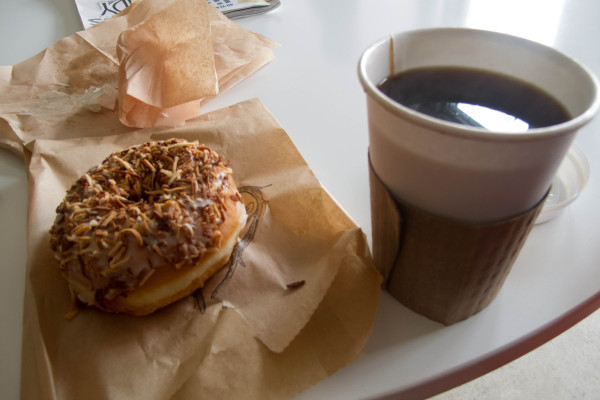