We’ve all done it. You want to know where to go, maybe you just want to try somewhere new in your own town, or maybe you’re heading to a new city, you need to know where to eat! So, we search Yelp. Only problem is, does Yelp really help?

Recently, Botto Italian Bistro in San Francisco set out to be the worst rated restaurant on Yelp. Owner David Cerretini claims that after ending his
paid advertising on Yelp, the website started to post bad reviews, and his good reviews went so far as to disappear. To combat this issue, he started a campaign offering customers 25 percent off for their 1-star reviews; a scheme that he says is the best business decision he has ever made. Their Yelp page is now filled with ‘bad’ reviews, some seriously hilarious conjured imaginations from Yelp contributors. 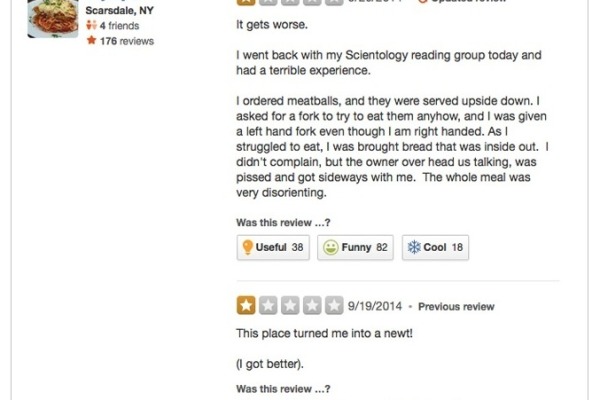 The story has certainly caught on, all press is good press? But how does this help me? How do I know if this restaurant is somewhere I would want to go?

Further to this issue, the Ninth U.S. Circuit Court of Appeals in San Francisco recently ruled that Yelp was within its rights to control reviews. The ruling was upheld in federal court with the Judge Marsha Berzon stating, “As Yelp has the right to charge for legitimate advertising services, the (alleged) threat of economic harm…is, at most, hard bargaining,” and therefore not an act of extortion or bad business practice. If reviews are tied to advertising, and they are legally allowed to be, how can they be trusted?

I must admit I’ve always been a bit sceptical of the Yelp concept, why should I trust these anonymous people telling me things? And, as in life, there is always two sides to every story, good and bad reviews – how am I to know which to believe? Honestly, sometimes it makes my heart race just thinking about how to decide. And now I have to worry that what I am reading is based on advertising revenue or schemes to influence ratings…

I have no real answer to my question. Maybe just skip Yelp and read The Spade?